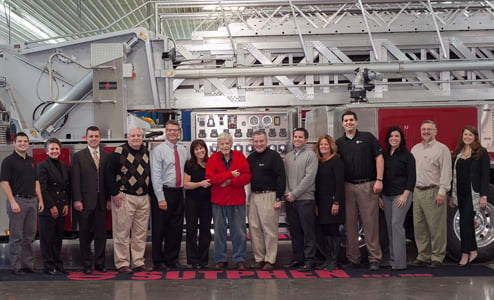 Sutphen began in 1890 as a dream of C.H. Sutphen. His son, Harry, took an interest in the business and carried it on until his death.

Harry’s two sons, Thomas and Robert, joined the business after World War II. They gained experience and job responsibility over the years, with Robert becoming Chairman of the Board and Thomas, President of the Company.

Sutphen is in its 132nd year of operation; making it the oldest continuously owned and operated fire apparatus manufacturers in the country. Never reorganized, owned or operated by anyone other than a Sutphen, family atmosphere is apparent. 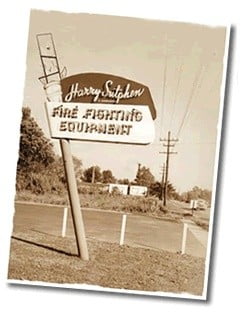 The first official Sutphen offices were in the Brunson Building in downtown Columbus. Later, the offices were moved to the Lincoln-Leveque Tower, a stately “skyscraper” that remains a landmark in Columbus, Ohio. The very first Sutphen fire truck was built in an employee’s garage.

Along with their success came a need for larger quarters, so the offices moved to Grandview, Ohio on Dublin Road, where they had three large bays in which to work. In 1958, two additional bays were added to accommodate the expanding business. In 1964, another move relocated the company to the present site of the “Corporation”, a new plant at 6450 Eiterman Road in Dublin, a suburb of Columbus.

A Family Company for over 130 Years

The fourth generation of the Sutphen family is at the helm. Bob Sutphen’s son, Drew Sutphen, is President of Sutphen Corporation; son Dan Sutphen and grandson Harry Sutphen are in sales. Bob’s daughter, Dareth Fowler, works for the Sutphen Service and Refurbishment Center.  Son-in-law James Holland is in the engineering department.  Drew’s wife, Judi Sutphen, is in charge of Contract Administration, and daughter Shelby is in Executive Administration.

Tom Sutphen’s daughter, Julie Sutphen Phelps, is President of Sutphen Hilliard and Sutphen East, as well as Vice President of Sutphen Corporation. Tom Sutphen’s grandsons, Scott and Andy Herb, are in sales, and grandson Steven Phelps is in the accounting department.
Although Bob and Tom are no longer with us, their passion for the fire service lives on in the day-to-day operation of the Company.

Evolution of the Factory

Today, Sutphen is comprised of five factories. The main office of Sutphen Corporation is located in Dublin, OH. The SP 95, SP 100, SP 110, and SPH 100 Aerial Platforms are manufactured at this plant, as well as Custom Extruded Aluminum Pumpers.

Located six miles south of the main plant, is the home of Sutphen Hilliard. This plant manufactures the SP 70 Aerial Platform, SA 75, SL 75, and SL 100 Aerial Ladders. The bodies of these units are constructed of stainless steel. Customers who specify stainless steel pumpers will also have their apparatus built at Sutphen Hilliard.

45 miles west of the main office, is Sutphen Urbana Chassis Division. This is the start of the Sutphen line. Sutphen Custom Chassis are assembled here using name brand components. Everything from the frame rails to the drivable chassis is handled here. This plant also produces the Commercial line and our Guardian pumpers.

The newest location is the Sutphen Service and Refurbishment Center located adjacent to the Chassis plant. Minor repairs to major restoration, and everything in between, is done here, including refurbishments and aerial remounts.

Previously located in Monticello, New York , the Sutphen East facility moved to Lake Ariel, PA in 2017. This facility manufacturers both aluminum and stainless steel pumpers as well as commercial pumpers and tankers. Sutphen East handles repairs and service for the local market.

Reflecting over the past 132 years shows Sutphen’s proud heritage. The company looks forward to an exciting future of continued growth and change within the fire service.